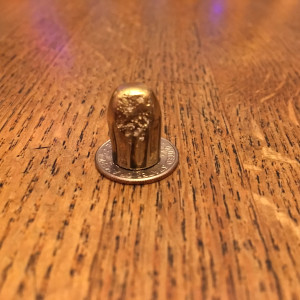 Well, more precisely, found on the street, in a neighboring suburb, while I was out doing a New Year's Day jog. I suspect someone was celebrating last night by shooting their 9 millimeter pistol into the air.

I'm guessing about the caliber, but I included a dime in the picture for a visual size reference.

I looked up an article, about whether a bullet shot into the air could kill you, which said that it would be almost impossible - if the shooter aimed straight up. But if the shooter aimed at a 45 degree angle, the consensus was that would be pretty dangerous. Anyway, I don't think this one hit anybody, although it looks like it got scratched up somehow.

Maybe they could lessen the chance of someone getting hurt
By shooting it downward into the dirt.
Collapse