They were set up to film stuff downtown today on Van Buren street - with the shiny white trailers beloved by the film crews, at least around here. I don't know what show they were filming - I don't pay attention. But one of the white trailers had a sign on it that caught my eye: 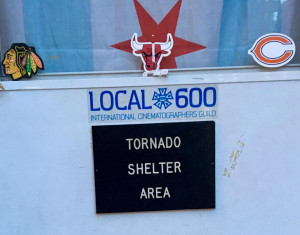 We don't usually get tornadoes downtown. But if we did, you would not be heading for this trailer. You would be heading for an actual concrete and steel building, preferably toward the basement thereof.

So, maybe it's some kind of inside joke, some union humor about getting away from the director's mad orders.

So while the sign appears legit,
Maybe that's the joke of it.
Collapse