It's funny, I just got a postcard advertising their upcoming production:

"Dead Writers Theater to Close in Wake of Harassment Allegations"

It all happened this week, very quickly. It started when the theater's artistic director threatened to derail the career of an actress, Megan Delay. In a public Facebook thread, he told her he could "easily smear" her.

"It was the tipping point that unleashed the Chicago theater community on social media in what some might well consider a mob-mentality takedown Tuesday afternoon."

I saw her last summer in their production of The Importance Of Being Earnest. I thought she was quite strong and funny. Here she is in a publicity shot from that production, with Jack Dryden: 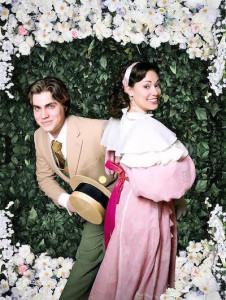 What started the immediate ruckus? The actress bowed out of a role, 10 days before rehearsals were set to start. It is, of course, annoying to the producer and director when something like this happens. They have to scramble to refill the role. I know. I've been there. Last time it happened to me, it was 10 days before opening. I could hear the blood pounding in my ear when I got the news. But, you know, stuff happens, and sometimes you have to roll with it.

Someone bailing out of your production,
Is not a reason to threaten career destruction.
Collapse