How to lick the last bit out?
Just stick in your furry snout! 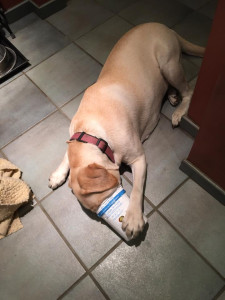 There was violence on both sides. True.

There was only deadly violence on one side, from one person.

Who was marching on that "Unite the Right" side? Were there decent people on that side? Trump apparently said there were. I mean, I'm sure there are people who would like to preserve the statue of Lee for various reasons which are not, in fact, racist. Were there a lot of such people at the rally? Or were they avoiding the rally because it looked to be led by a bunch of neo-Nazi pro-Confederacy types? I can't tell, and it doesn't seem like any reporters are working the angle of exactly who was at this mess.

There's a group that is described as alt-right or far right, called Proud Boys. I want to quote from their website:

'I hope they all enjoyed the little “street performance” with their KKK pals. THANK GOD THE PROUD BOYS HAD NOTHING TO DO WITH THAT.' (Lots of NSFW swear words at the link.)

If you're thinking of marching with Nazis,
I really suggest you don't.
You may believe it will work out well,
But history says it won't.
Collapse