Why do witches favor cats?
Is it to fight off vampire bats?
Is there in fact a running feud
Between them and that Dracula dude?

I've been mentioning Emily Dickinson, and the other night I heart an indirect Dickinson joke on the sci-fi comedy-drama TV show, The Orville.

There's a green translucent blob character on the show, sort of a big slithering mint jelly with a mouth. And he's in love with the human doctor on the spaceship. She has been refusing his advances.

So, the other night he declares to her, "The jelly wants what the jelly wants." Someone already made a meme of it: 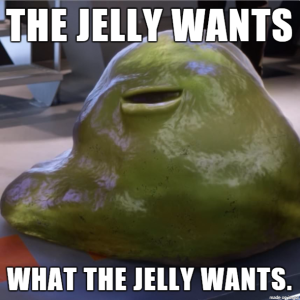 Now, the direct reference is to a Selena Gomez song, "The Heart Wants What The Heart Wants," with lyrics that include these lines:

“There’s a million reasons why I should give you up
But the heart wants what it wants.”

And that's what gets us to Dickinson, to a letter, actually, not a poem:

I'm not sure when this became a famous Dickinson quote. I took a college course once on Dickinson, and I don't recall discussing it. Of course, that was at the dawn of time.

Way back before the dawn of time,
I struggled to decode
A message wrapped in gentle rhyme,
But ready to explode.
Collapse