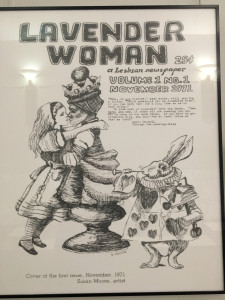 This is a photo I snapped from an exhibit at Chicago's central public library. That's the cover of the first issue of a lesbian newspaper. The illustration shows Alice kissing the Red Queen.

"The past is a foreign country; they do things differently there." And one of the things they did in the early 70s, was represent children as having sort of proto-sexual interests. At that point, the Freudian establishment was still constantly hitting the drumbeat that children were sexual beings. The Freudians had some fairly dark views on this.

How old is Alice, you ask? Well, Wikipedia says:

So, anyway, what really struck me was that the curators at the library went ahead and put this up on the wall. I'm surprised they weren't more concerned about the whole child-sexual-abuse thing! Is that girl old enough to consent to that kiss?

Perhaps the curators would agree
That even recent history
Already looks quite strange
After the flood of change.
Collapse